Many of us artists and creatives have used talent and inspiration as a form of escape: an escape from stress, worries, isolation and just plain life. We tend to take in emotion and energy that is around us; positive or negative. We absorb all of the hate, love, sadness, happiness and anger that floats into our atmospheric bubble. Art becomes the way we cope with that energy. Whether it be through words, illustrations, or abstract, what we create is some sort of manifestation of trauma, emotion, idea or energy.The art becomes the reprieve, encompassing a sadness or hopefulness in each brush stroke or rhythm. However, that escape can also become addictive and a bottomless well that we cannot crawl out of. It becomes the very thing we attempt to escape. Nancy Mendez beautifully and honestly demonstrates the artist’s struggle through her intricate creations and story.

Mendez and her mural painted on the walls in her apartment

“I have a problem with authority,” Mendez says as she moves her pen slowly and intentionally down the piece of plywood. “I’m the ‘malcriada’ of the family.” According to her family, she was notorious for speaking out and rebelling against their traditional values. “There’s a picture of me flipping off the camera and I was like three. Like I said; I have always had a problem with authority.” She looks up at us over the rim of her white framed glasses. We all laugh and open the huge jug of red wine. I pour a few glasses and hand a few of the artists around me. Mendez pours herself a glass of wine from her signature host’s gift. “I gotta find that picture. I’ll message it to you.” She moves back to her drawing and her pen moves effortlessly along the wood grain, creating different images flowing into each other. 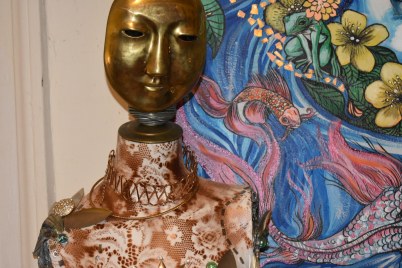 A visual artist, Mendez has been actively creating for as long as she can remember. “ I always drew. With anything and on anything. My mom was an artist. She didn’t pursue art or nothing, but she was creative.” Mendez’s drawings and paintings are either black and white or bold and vibrant colors. Currently intricately drawn silhouettes, faces, eyes and abstract ideas, her art is unique to her style. She uses restraint in where she places her lines, but freedom in what those lines will look like and become. “I just look at the line and see something there. Like right here,” She points to a line that creates an edge of a sun. “That looks like an eye to me. So I’m gunna draw an eye ball.” She effortlessly draws a perfectly feminine eye, continuing the unbroken line. She takes a sip of her wine, her glasses reflecting the dim light, and looks back at her drawing. “That looks like a cat!” I watch her hand glide across the board and wonder how she can be so free with what she draws next. Where does the next move come from? What we see in a work or what we create comes from some where deep down. Whatever it is, it guides our hands and words. “I feel like I draw eye balls because I feel like there was always somebody watching me. My mom, my dad, my sister, my sister’s friends…Always somebody watching.” This pressure is portrayed by the various hidden symbolism embedded in her art work. Eyes, faces and messages can all be seen if the viewer looks close enough.

Being inspired by a friend to go to school for art, Mendez enrolled in FIT against her parents will. Hoping that 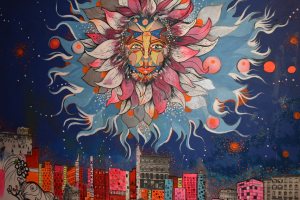 she would find a more traditional career path, her parents refused to support her in her venture. “It hurt that they wouldn’t help me. It hurt a lot.” Mendez pours some more wine and takes a long look out of the windows. “I didn’t like it there though. I was the outcast again. I was the only Spanish person there.” She shrugs her shoulders and begins to tells us a story about a final she had made that her professor had graded poorly. She had hidden a phallic symbol in the intricate line work in retribution. We giggle at her rebellion as the jazz music crescendos in the background. We compose ourselves and she continues with her story. “So much of my art comes from a fucked up place.” For some time, the freedom of creating and the repressed pressure lead her down a drug fueled journey. She spent many nights in a drug induced reality. “ I got fucked up and went to own on my walls!” It took her some time and returning to her home town to gain power over those struggles.

Many of us artists travel down that path of a distorted, often drug or alcohol infused, reality. Whether it is the art that drags us there or pulls us out, we are are often humbled by the experience. Many of the artists that lose a sense of reality, remain there in their distortion, in that dark place, leading to disaster. Finding herself heading towards destruction, Mendez returned back to her roots and art as expression, not chaotic freedom. “I don’t wanna feel out of control again. I don’t wanna be there again. That shit scares me, yo. And I can be weak so I try really hard…I wish I could do this full time. I really do. It would be fulfilling but also scary to have that much freedom I think.” She avoids our gaze and continues with her work. I watch her for a few minutes, mesmerized by the ease and control she has over the pen. She explains her process and I think about my drawing pencils collecting dust in my drawers at home.

The music abruptly stops and the record player burns out. After a few minutes of attempting to revitalize it, we put music on using speakers. The modern music is almost harsh in contrast. We sit back at the table and pour some more wine. Mendez rubs her eyes under her glasses as she explains her “voice” and what her audience should know. Her audience eager to listen.“You don’t suffer alone, even though you think you do or you can be…You think your’e alone but you’re not. You’ve got other people going through the same fucking shit you are. You just don’t know it, because people don’t talk about it…It is important to talk about to show or relate through a visual or draw it out. It is important to talk about it! Communicate…because it may save somebody’s life.” She puts her hands to her face a sighs. “Fucked up shit happens in life…so if you gotta sing it, if you gotta write it, if you gotta say it, if you gotta fucking dance it… put it out there!” She looks up at us, her audience, smiles and continues her work.